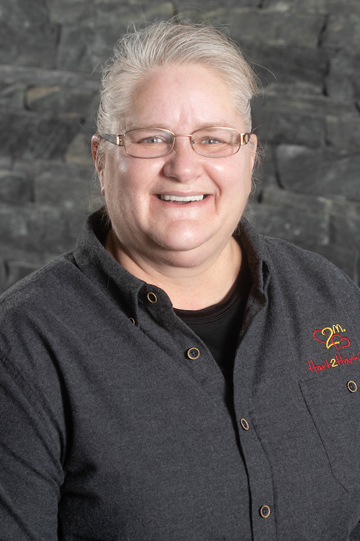 I have been with MCHartshorn/Hart 2 Hart for 29 years. I started at McDonald’s way back in 1982 when I was 16. I started as crew and worked my way up to crew trainer and assistant manager by the end of 1984. I then decided to follow a boy to Denver where I worked as an assistant manager for a McDonald’s there for about a year. It wasn’t the same atmosphere, so I eventually left and went to work for 7-11 stores as a general manager. I did that for several years. After my mother passed away in 1992, I decided to move back to Watertown to help care for my 2 much younger brothers and immediately went back to McDonald’s. When I asked Carol Hurkes if I could please please please come back to work at McDonald’s she immediately gave me a chance. I started back as crew but within 2 weeks, I was an assistant manager at the Interstate store in Watertown. I was a single mother of 2 at the time, so I had to have 2 jobs. I worked full time for both places. Eventually that became too much for me with raising 2 small children and the other job payed considerably more, so I again had to leave McDonald’s with much regret, but out of necessity. In 1994, I got married, and was then able to go back to the job I loved the most, the place I actually enjoyed being at EVERY DAY! Curt Wilhelmi offered me a position as 1st assistant, and to be his right hand. I jumped at the opportunity. I worked in that position for approximately 3 years. When Mike Hartshorn purchased the stores, Carol moved to a supervisor, Curt moved over to the in-town store, and in March of 1998, I became general manager at the Interstate store. My dream had come true! I worked there as a GM until January of 2008. Curt then was promoted to supervisor, so I was given the opportunity to become the GM of the in-town store. I worked as the GM there until July of 2019, when the opportunity to move to Sioux Falls was given to me when Jordan purchased 2 stores there. I immediately jumped at that chance and at the end of July, I was promoted to supervisor. I can not believe how fortunate I have been to be able to grow in this amazing company. I have always been treated as family. I have gone through some terrible things in my life, but they have always been there for me and had my back. They have never given up on me. Carol once told me she had ketchup in her veins, I believe I do as well.

My hobbies include golfing, reading, watching crime shows and spending time with my children and grandchildren. I love animals of all kinds, they are my passion. (I think I was an animal whisperer in a previous life, lol). I have 5 children, 1 of whom has the same love and passion for McDonald’s that I have and is a GM with our organization as well. My 4 oldest children are all grown up. My youngest child graduates this year. I have 4 grandchildren.

My favorite part of working at McDonald’s is that every day is different and challenging. There is never one day that is the same as the next. I get to teach and coach a variety of people from young to older. I love seeing people learn and grow in the organization. I know that for most people, this is just a job, but if I can make even a small difference in their lives, by helping them enjoy their job, or love the brand, or even show them what a wonderful career this could be, I have done my job. What I want, is to make a difference to my people. They are the most important thing to me. I don’t judge my success on awards, etc. I judge it by how my team succeeds. Without amazing teams, I would not be where I am today. My goal is to be the best leader they have ever had.

I personally am very grateful to have been given the opportunity to be a part of this organization. Without it, I am sure my life would be a lot different, and not necessarily in a good way. I have always been treated with respect. I have been given the opportunity to be who I am, faults and all. I have learned so much about being a great leader and a great person from those I work with and for. I feel like the luckiest person in the world. Thank you to all of you who have helped me become the person I am today.